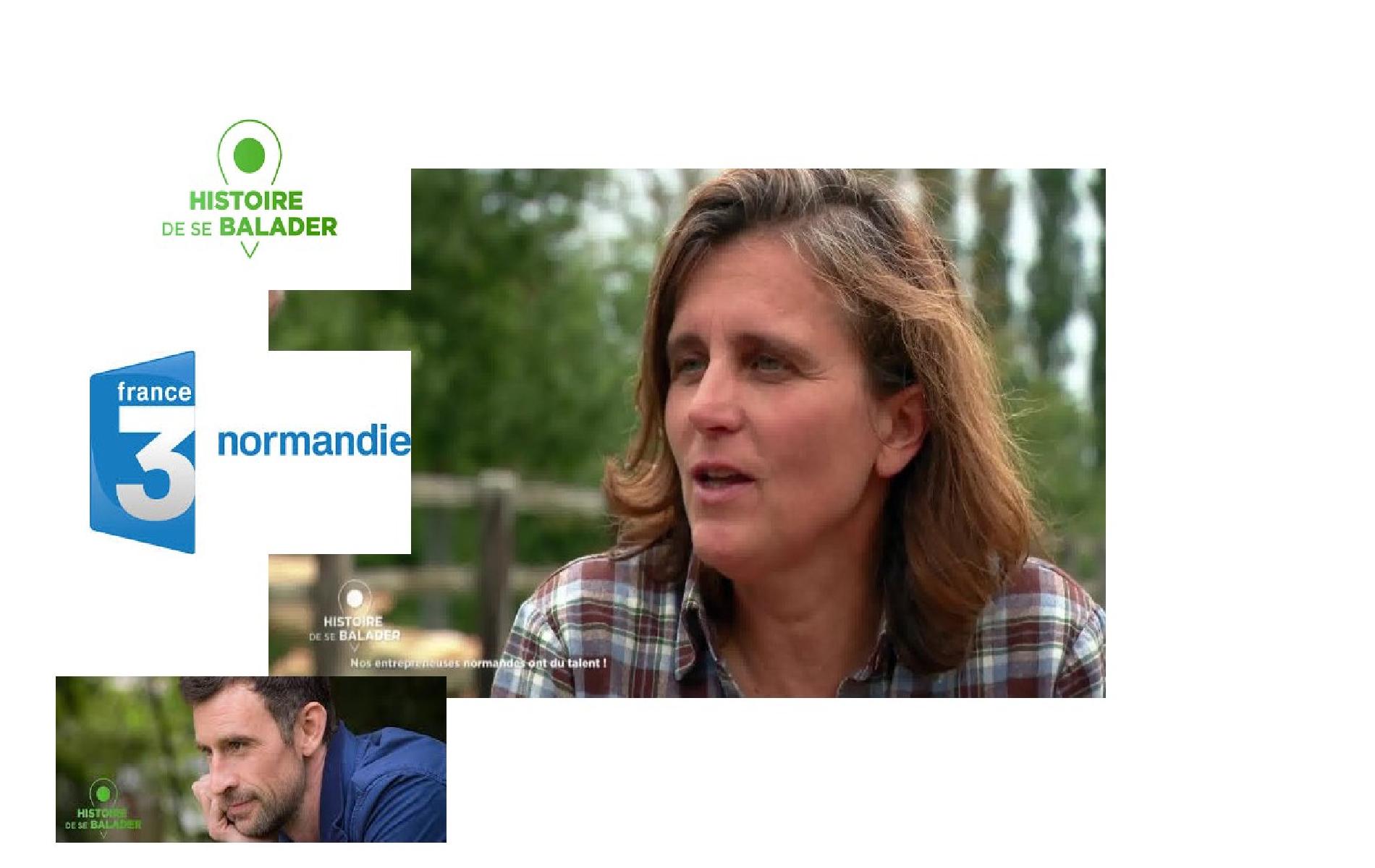 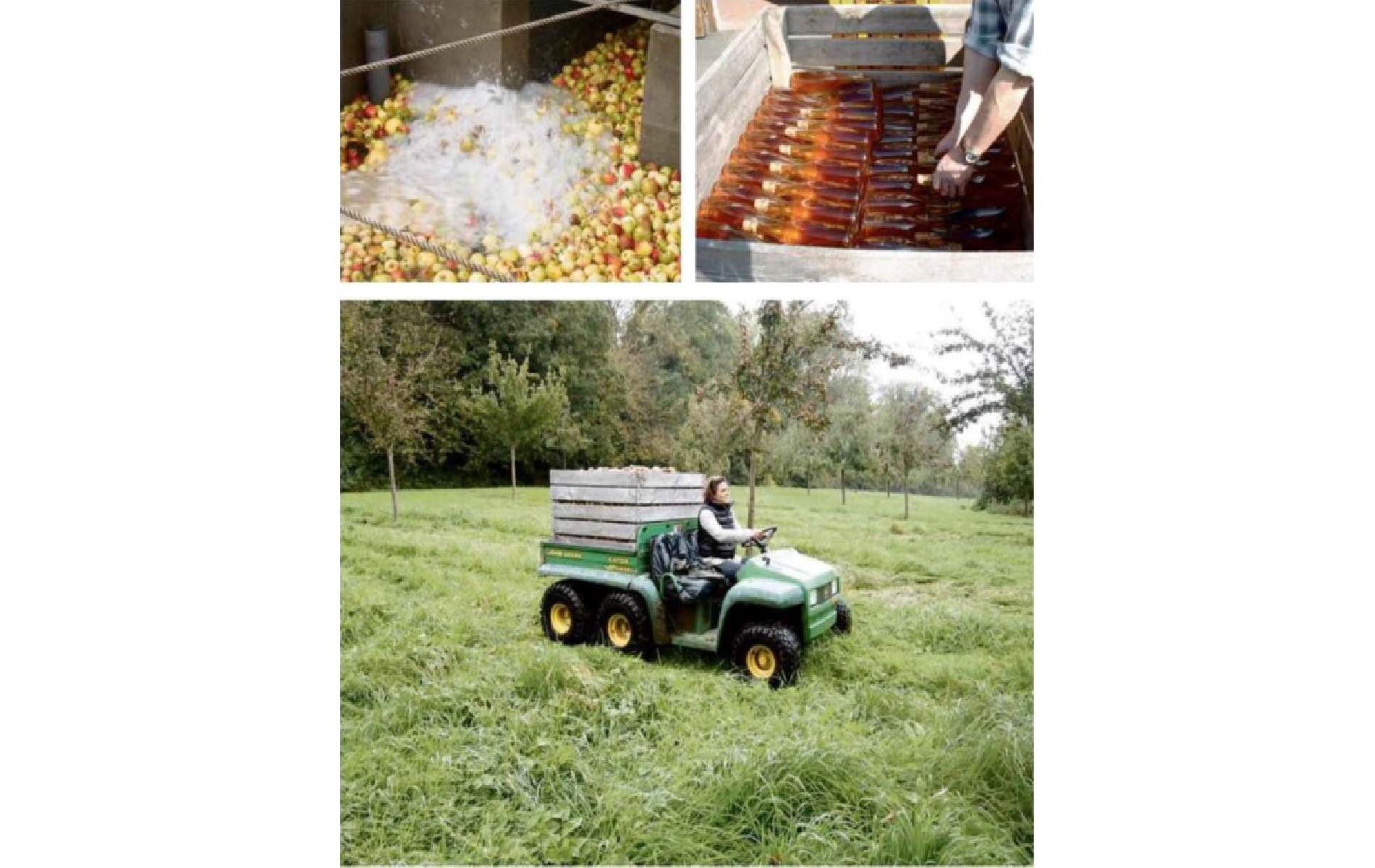 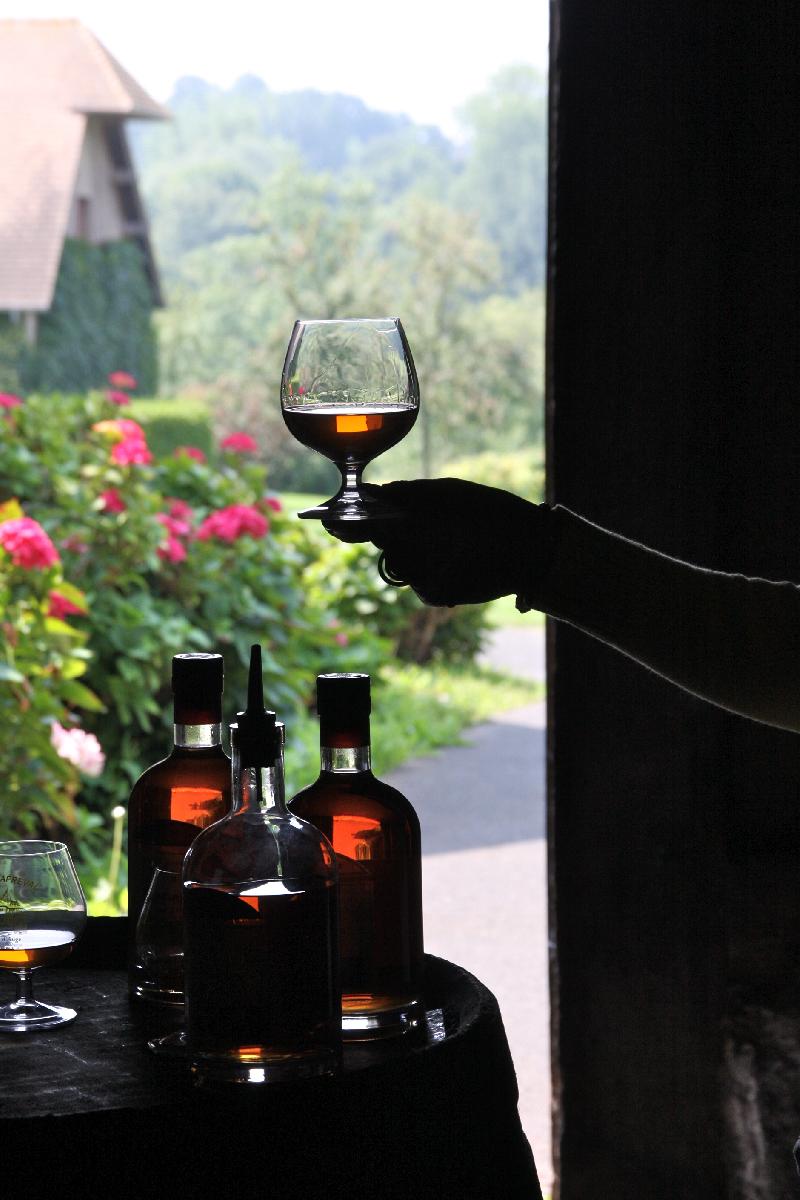 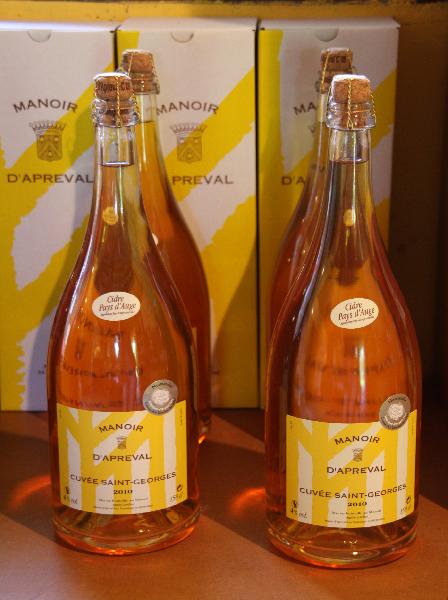 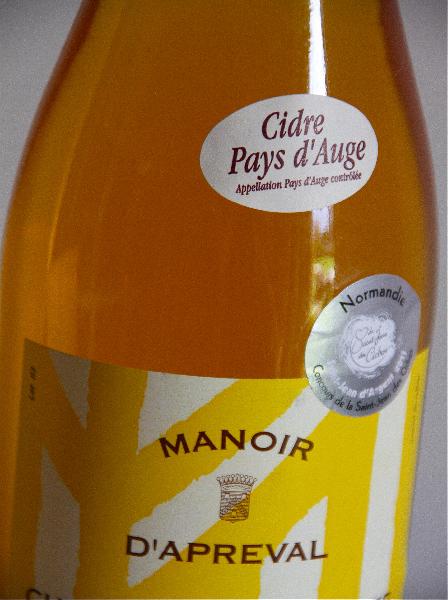 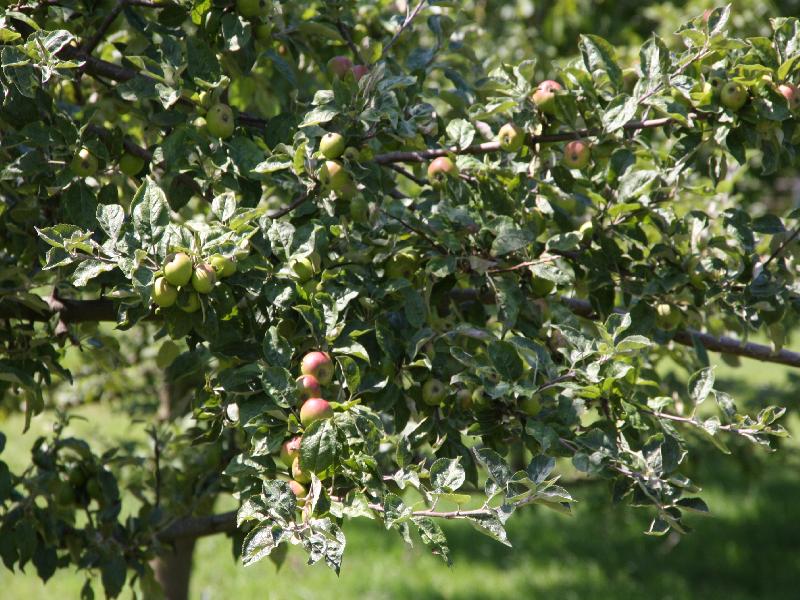 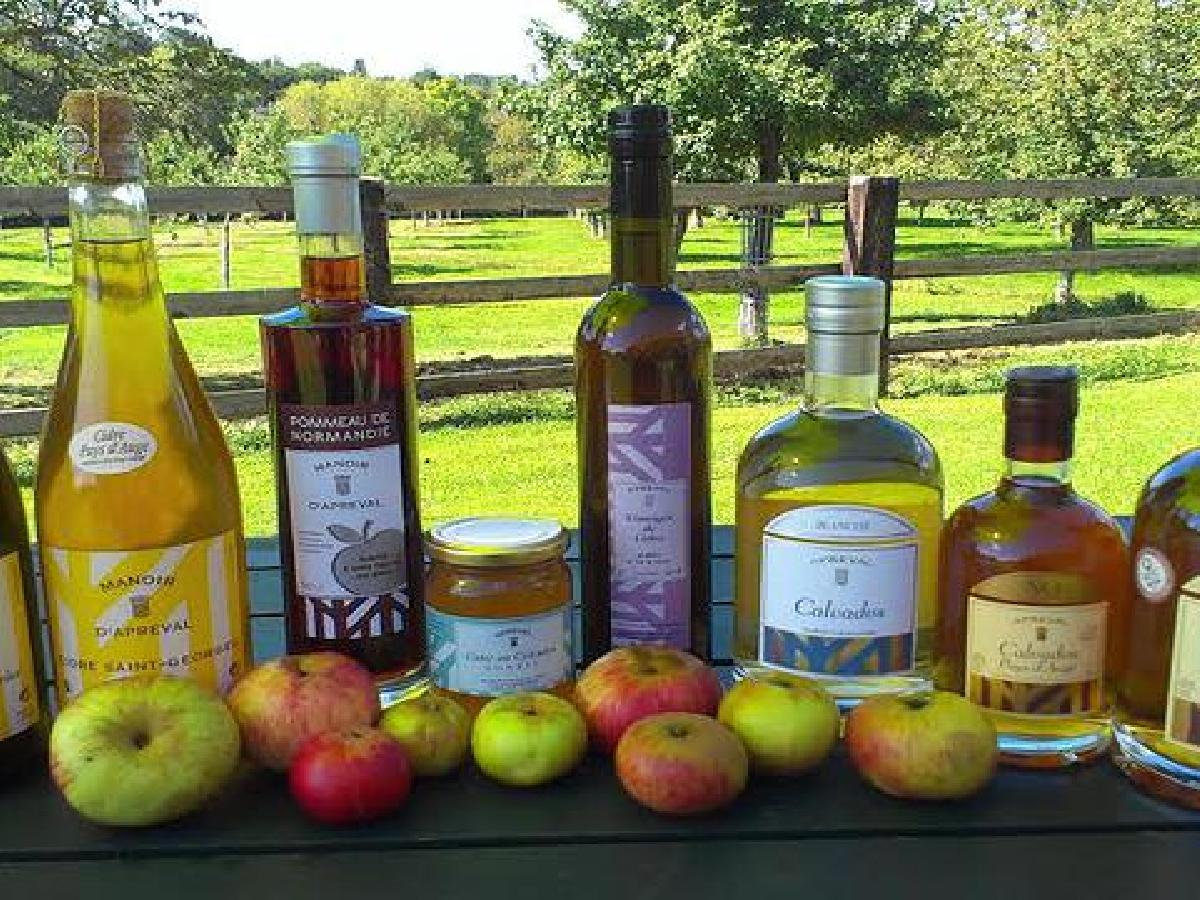 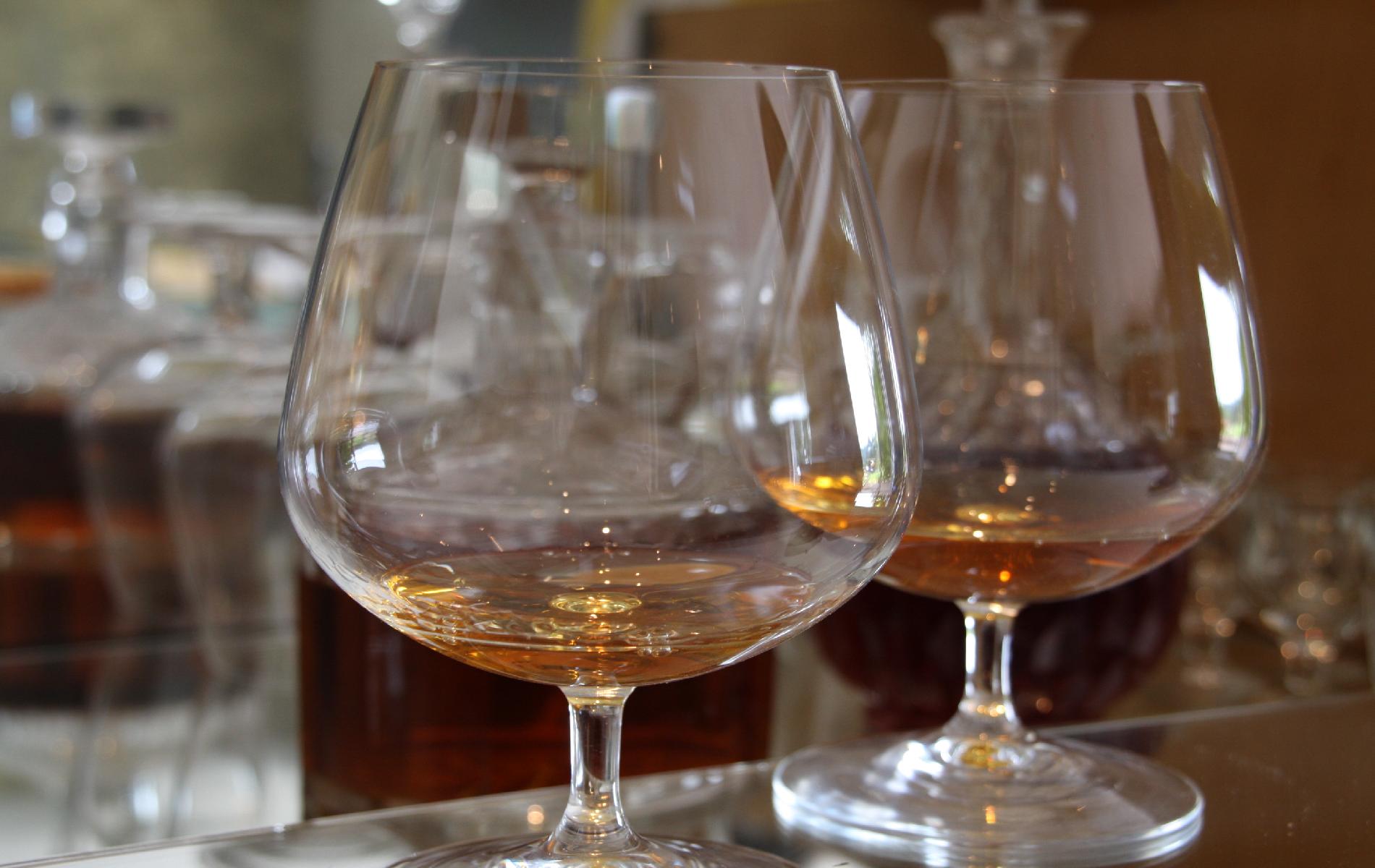 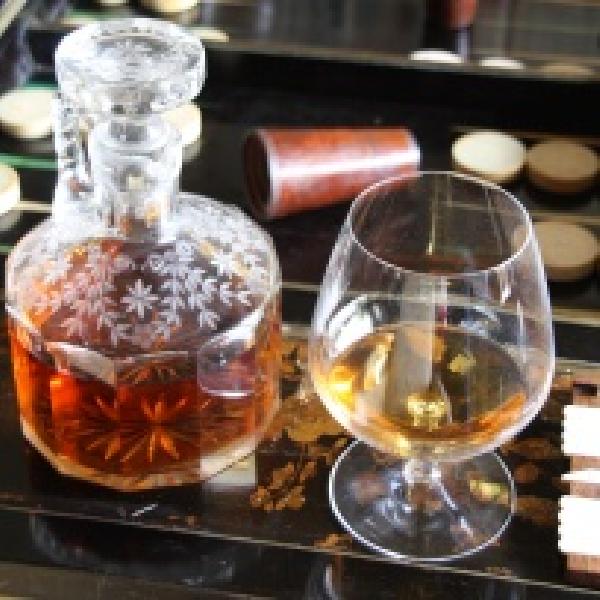 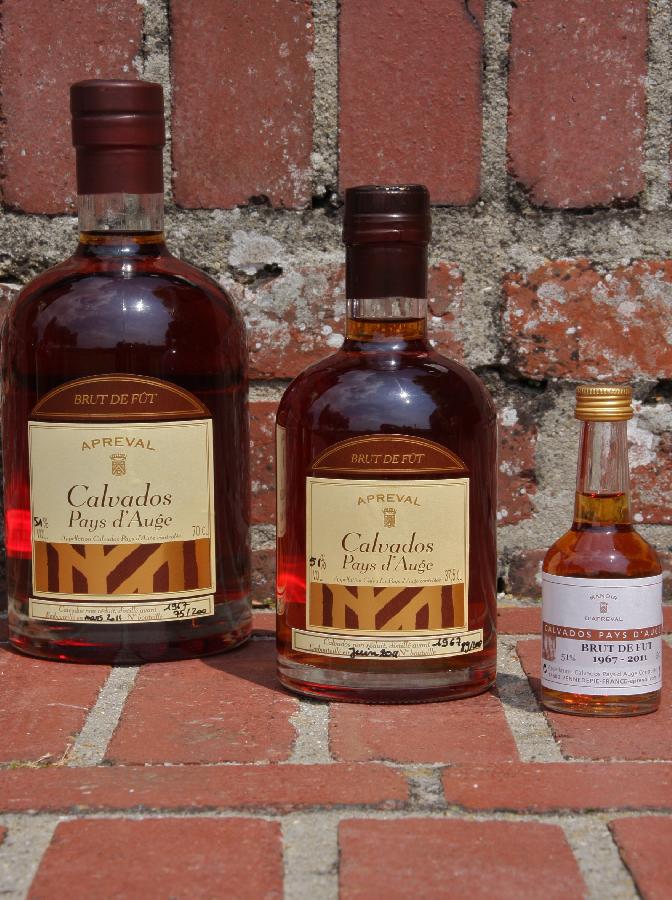 Calvados in many ways represents the heart of France.  A product that has been made for centuries and took over from wine when the great phylloxera outbreak happened in the late 1800′s. There are over 200 varieties of apples used to make Calvados.  Firstly though, the apples are pressed into cider, then fermented.  At this point it is distilled and aged for at least two years in oak barrels.  In 1942, Calvados became AOC under the name “Calvados Pays d’Auge”.Manoir D’Apreval is a beautiful estate located in the heart of the Côte de Grâce.  In 1998, almost two thousand apple tress were newly planted, representing seventeen different varieties. All of the farming is done organically.Pommeau (34 proof)

Nose: Lots of apple with a slight cider vinegar note.

Taste: Sweet, rustic and with a chewy mouthfeel.

Overall: Quite drinkable and perfect for a light meal.

Finish: A bit thin and mild.  The lasting impression is of a slightly fiery eau de vie.

Overall: A decent young Calvados good for adding some punch to a cocktail or as the base for an autumnal beverage.

Taste: Bright wood notes are somewhat tempered by hints of caramel and vanilla.  The apple comes through quite clearly and makes for a hearty sipper on a cold night.

Finish: Dry and fairly short.  There is a sense of the whole apple here, from seed to skin and flavorful fruit.

Overall: Akin to applejack and yet with an unmistakable French character.  Perfect for use in cocktails highlighting the juicy apple character.

Taste: Intense and rustic with a lot of the apple character still making its presence known.

Finish: Long and apple driven with spicy elements popping out now and again.  But, make no mistake, this highlights the fruit and not the cask aging.

Overall: Another good Calvados to use in a cocktail, or as an adjunct in an apple dessert.  This would be killer used in whipped cream.

Nose: Warm, mellow and with a deep baked apple scent.

Taste: Very smooth and creamy with a crisp bite at the end.  Fine, elegant and a fantastic sipper.

Taste: Light and crisp, with a lot of dry apple notes.  Almost sherry-like in character.  Quite feminine.

Finish: Brief and with wisps of green apple that make several appearances.

Nose: Caramel and just the slightest hint of apple fruit.

Taste: Quite rich, with a lot more caramel woodiness than the 30-year-old.  Almost dessert-like with an intense mid-range that is chewy.  The apple plays a secondary role here, with the age of the distillation transforming it into dessert in a glass.

Finish: Medium with lasting note of a strong reduction of apple and caramel.

Overall: Unique and memorable.  A real treat for Calvados enthusiasts.

Taste: Despite the age and high-proof, this has a lot of the character of a young Calvados.  The apple is quite apparent and fresh tasting.  The spice comes through as pepper and there is a palpable salinity too, making for an interesting contrast to the fruit.

Finish: Fairly long, but with the spice quickly fading while the apple remains.

Overall: Another surprise here.  I like this a lot and would pull it out once a decade as a celebratory libation.  Quite a testament to the longevity and variety of apple brandies. 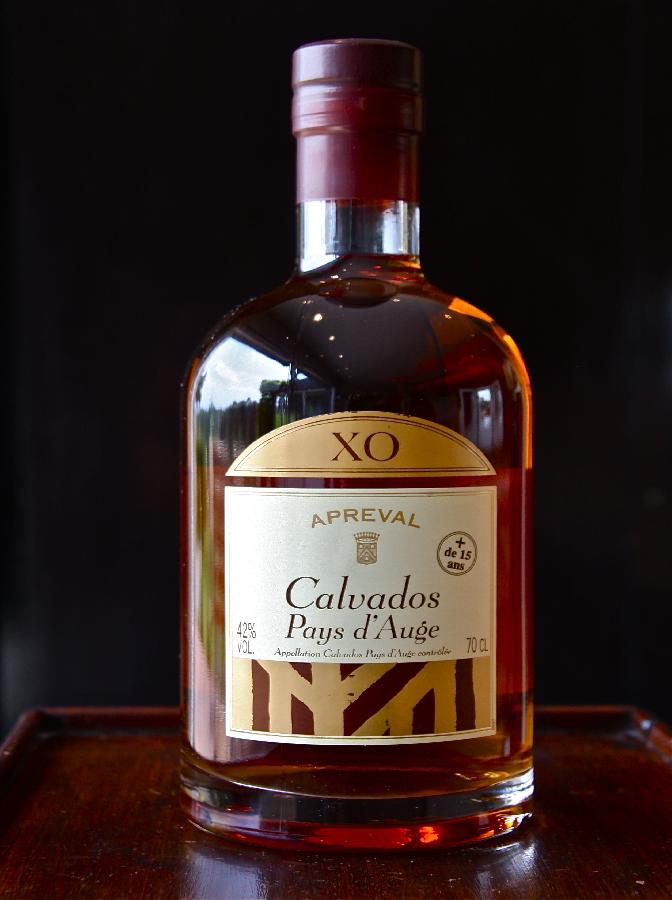 Manoir d’Apreval Calvados Blanche – Aged 2-3 years. Crisp apple aroma, but there’s plenty of heat here as well. The body offers tart apple (think Granny Smith), lemon peel, some floral elements, and a touch of wood on the back end. Rustic, almost pastoral. This is clearly young stuff, particularly on the slightly rubbery and lightly vegetal finish, but it still drinks well. I’d consider it primarily for cocktailing, sipping neat in a pinch. 80 proof. B ?

Manoir d’Apreval Calvados Reserve – Aged 4-6 years. Slightly nutty, almost Amaretto-like, on the nose, with clear apple cider coming through behind. A clearly stronger wood influence lends this Calvados a bigger and bolder body, with a rounded mouthfeel and stronger vanilla notes on the palate. The finish is still a little tough, though the more vegetal notes have started to balance out with the sweet ones. 84 proof. B+ ?

Manoir d’Apreval Calvados Grande Reserve – Aged 10-12 years. The nose is mellowing out here, with more of an applesauce and gentle honey character to it. The body offers strong apple flavors, balanced by hazelnuts, chocolate, and a light herbal quality. Good balance, with a bit heat on the back end. It’s definitely a Calvados I’d have no trouble sipping on, offering the best of both the orchard and the world of brandy. 84 proof. A- ?

Manoir d’Apreval Calvados XO – Aged 15-20 years, noticeably darker in color (from here on out). Becoming increasingly Cognac-like on the nose, with sweet caramel, gingerbread, and incense notes… but still those unmistakable apples shining through beautifully. Robust on the body, with thick cinnamon-apple notes and a big Christmas cake character that lasts for a long while. The finish builds dramatically to something that is both sweet with notes of cake frosting, and savory, with a woody, almost earthy conclusion. Lots going on here, and probably my favorite expression in this lineup. 84 proof. A- ?

Manoir d’Apreval Calvados 1980 – Single-vintage (harvest?) brandy from 1980, 33 years old. Just imagine, when these apples were picked, Jimmy Carter was President. Sultry nose, with a slight licorice note to it, along with ample wood. The body is vast, with the wood notes taking center stage.There’s even a touch of astringency here, as the deep oak character muscles aside the fruity apple cider core from time to time. Intriguing but a much different animal than the XO. Try the two side by side for a real mindbender. 84 proof. A- ?

Manoir d’Apreval Calvados Cuvee Victor – A blend of brandies, each at least 30 years old. Coffee and licorice notes on the nose lend this a Spanish brandy feel. There’s lots of dried fruit — not just apples but raisins, too — on the palate, but the finish takes things toward a winey character, almost like a Marsala, with some balsamic touches. Quite the curiosity — rich and austere. 82 proof. A- ?

Manoir d’Apreval Calvados Cuvee Gustave - A blend of brandies, each at least 40 years old. Dense coffee, mixed nuts, and dark chocolate notes. You won’t catch much more than a bare whiff of apple character on the nose, but it comes across on the body — dried, baked, then chocolate-covered and baked into an almond torte. Another intriguing, hoary, and unexpected spirit. 82 proof. A- ?

Manoir d’Apreval Calvados Brut de Fut 1974 – Single-vintage Calvados from 1974, 39 years old.  Stronger apple character here than in some of the other old expressions, with a distinct vegetal note on the nose. Spicy on the palate, with some cinnamon notes, but also a tougher, more rubbery finish. Not as successful as the blends. This is no longer in production. 84 proof. B ? 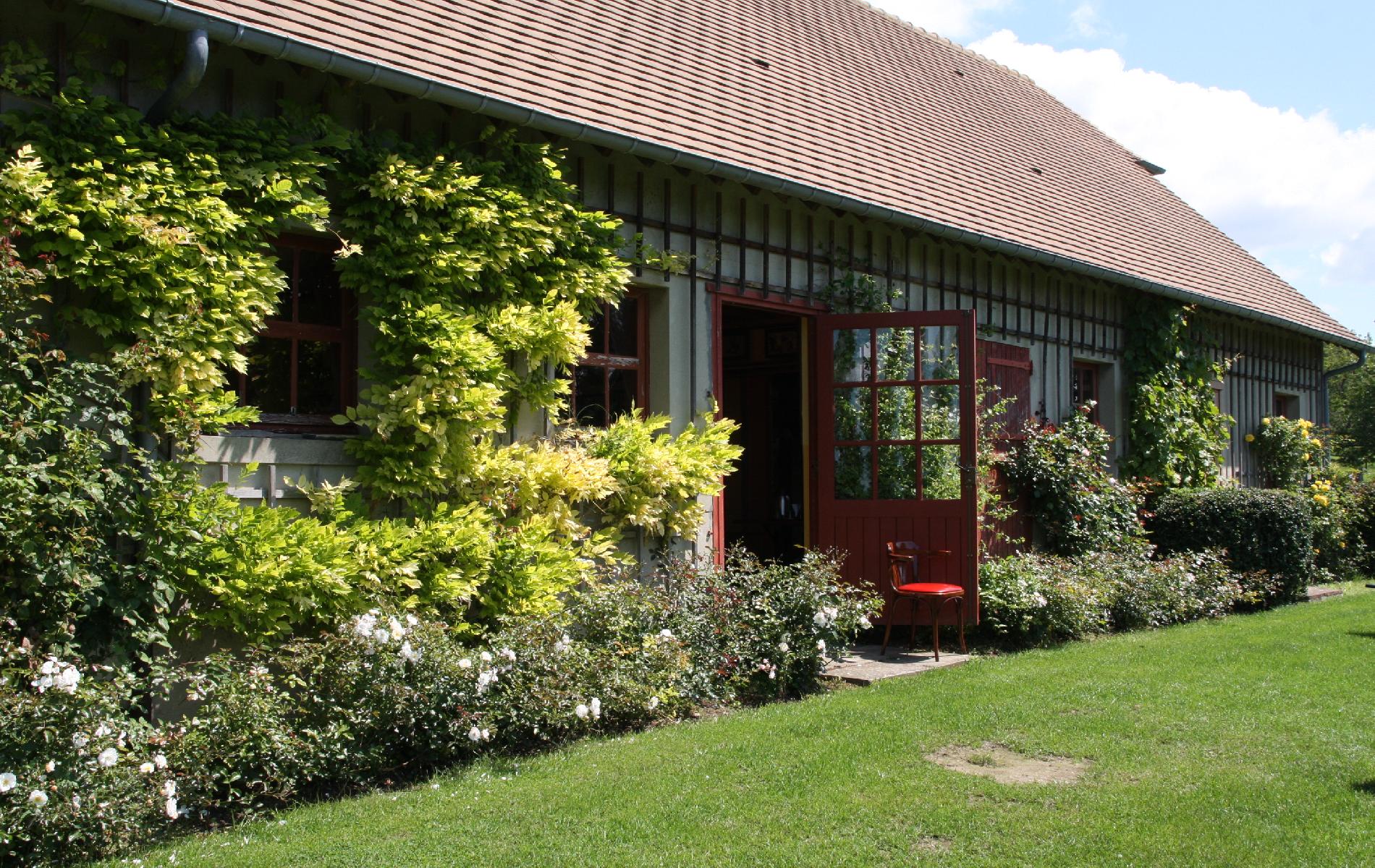 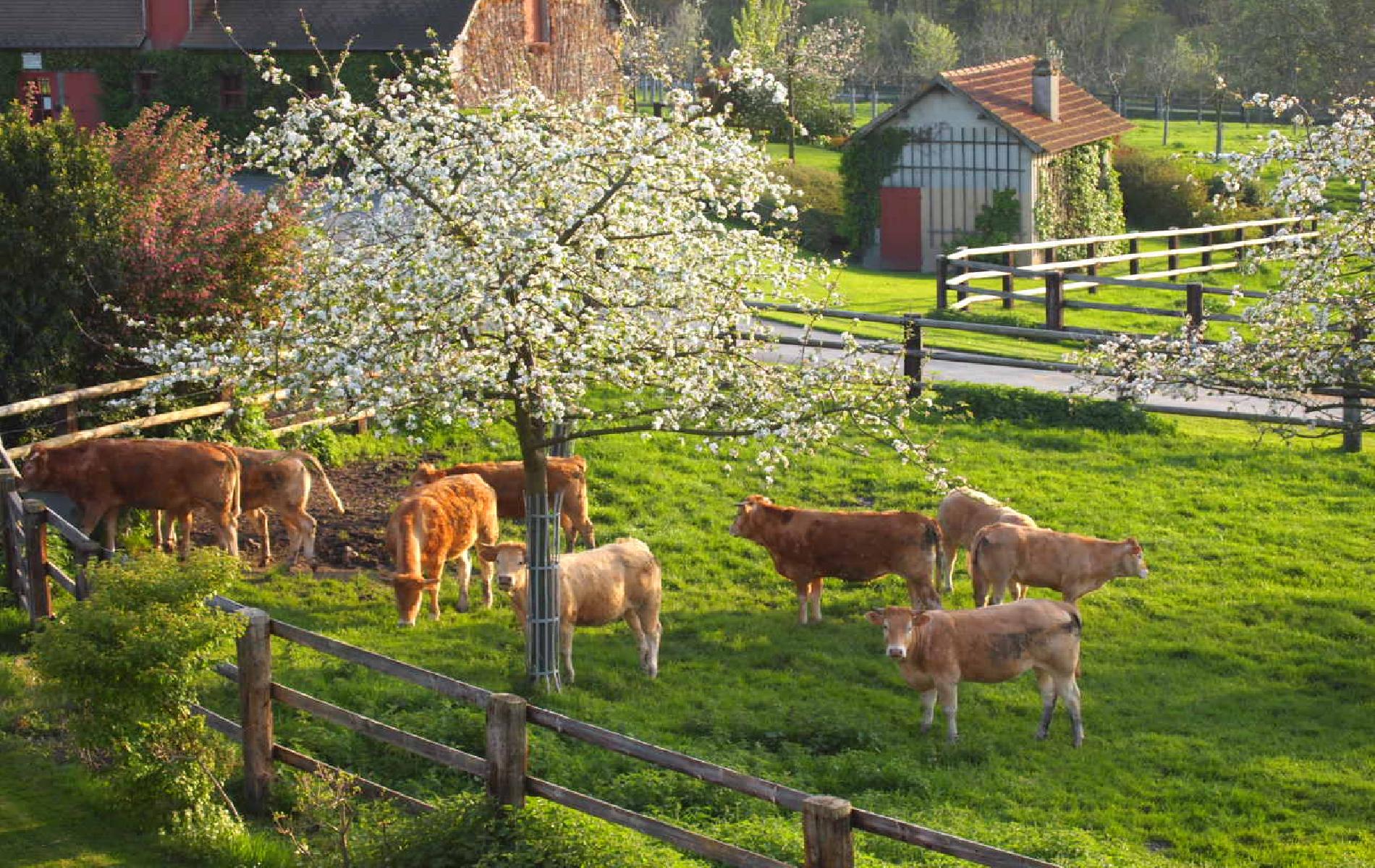 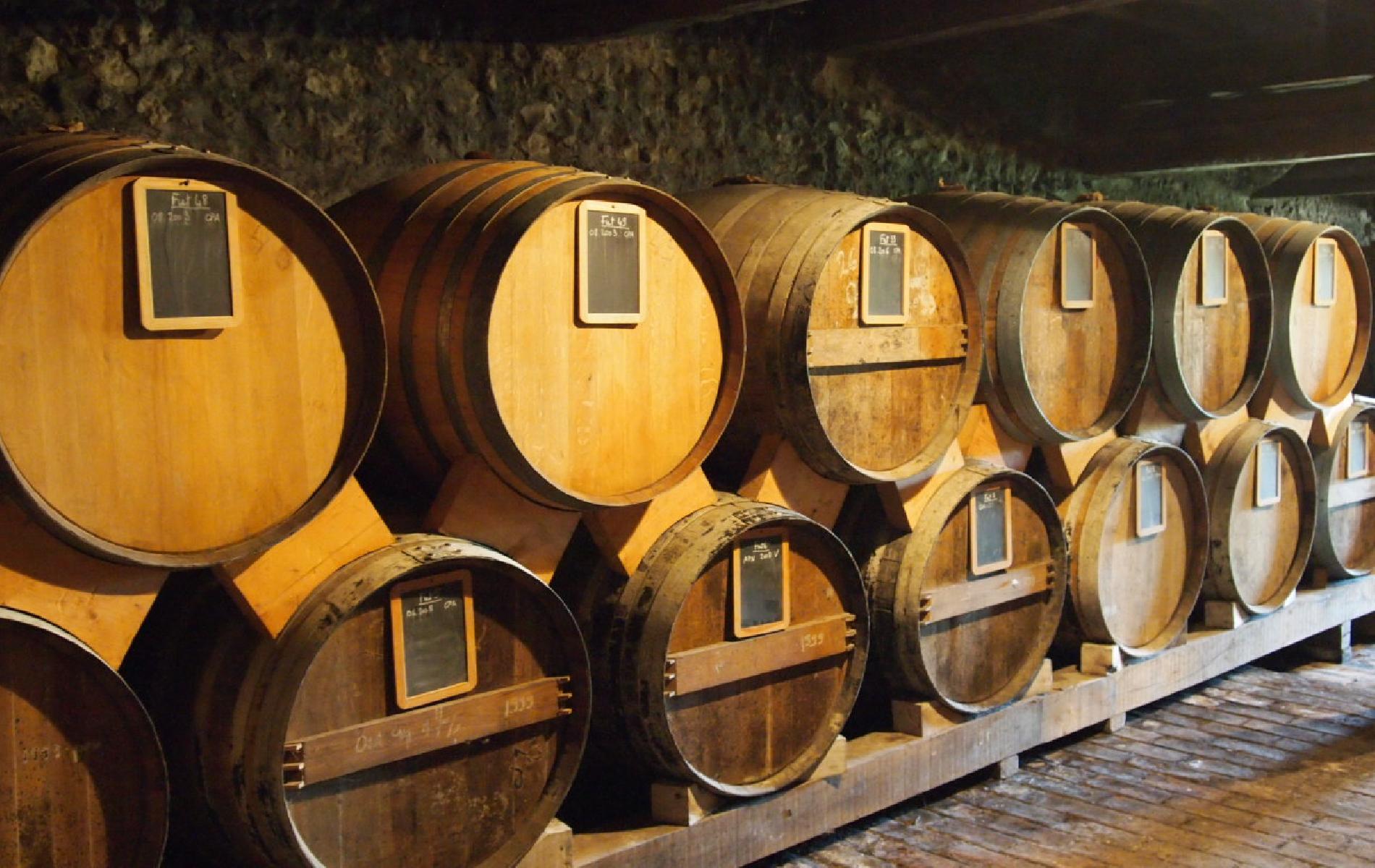 Normandy's sweeping beaches, speckled cows, and soft cheeses create a snapeshot of idyllic french life and the Calvados and haute cuisine of the region are not to be missed.